Underwater hunting in the river 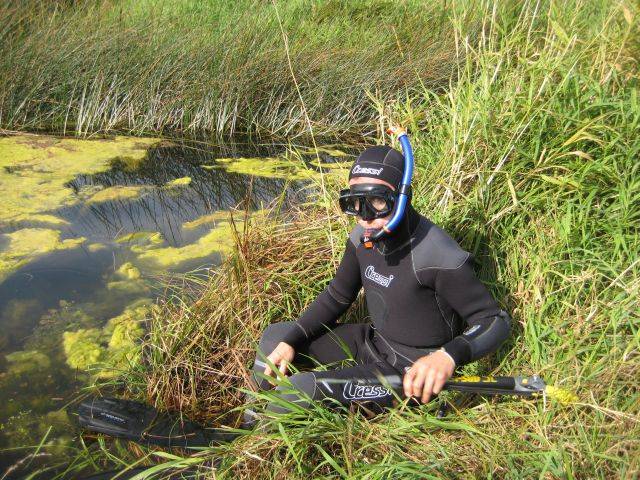 Underwater hunting on a river has a number of nuances. The first thing that helps, and at the same time hinders – the undercurrent. Because of him, the diver increases the physical load, reduced breath holding. But at the same time, thanks to the current fish get used to the noise and may not notice the approach of the hunter.

The current enriches the water with oxygen, which also affects the behavior and quality of fish. Due to the washout of the ground, river debris is formed in the river. And river rubble is the best place for fish to live (namely catfish, pikeperch and walleye).

Such hunting can be no less emotional and interesting than in the sea abyss. Is that the trophies here are slightly different. And the fish is more cautious.

And also its appearance in one place or another is difficult enough to predict. But everyone can dive in small rivers, because it does not require deep diving and holding your breath for a long time. And another plus is that you do not need to buy tickets and go somewhere.

Small rivers are called the rivers, the depth of which is no more than 4-5 meters. In this case, the length of the river does not matter. But the vegetation plays a huge role in the beauty of the underwater depths.

Hunting in small rivers uses a variety of methods – active search, square-nesting, rafting and laying and so on. Often the fish must be sought in shelters, according to this factor allocate hunting in the reeds, in thickets of grass, in the rocks and rocks, in snags.

Underwater hunting in rivers in winter

Hunting in the river in winter is good in many ways. At this time there is excellent water transparency, and fish activity is much less than at other times of the year. This hunting is significant trophies. It is during this period it is not bad to hit pike and pike.

At the same time, the diver needs to pay special attention to his equipment.

Thickness wetsuit should be 9-10 millimeters. If it is less, the diver will overcool. As part of the equipment is a good idea to include 7 mm socks from neoprene. Flippers Choose based on the thickness of the socks.

You can use subshlemnik for a person. In the winter, use long guns or long crossbows. А flashlight turn on during the daytime hunting as well. If there is ice on the body of water, you should not dive without a compass. Also, do not forget about diving knife..

It is desirable that on the surface of the body of water waiting for you a tent with a heater and warm tea, which will stop the balance in the body.

If you decide to go scuba diving on the river, you will surely enjoy it. After all, so close contact with nature and home can not leave indifferent.